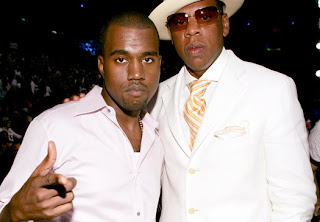 Word is that On Sunday night, Kanye West and Jay Z got into a screaming match backstage at London's Wireless festival in the UK. Kanye was scheduled to close the show and he wanted to bring Jay Z out with him. But Jay wanted to close the show himself. The two reportedly got into a "heated" screaming match which ended with Jay Z leaving the arena without performing. You knew it was only a matter of time before those two egos clashed.


Well I Heard "Through The Wire" When It "All Falls Down" "We Don't Care" Because "We Major" But You Gotta Learn to Live with "Regrets" & You Just "Can't Knock The Hustle" But in this Case When it Comes to a Good Friend Jay-Z Might have Just "Lost One" I Remember Hova Saying He would "Never Let Me Down".

FOR THOSE OF YOU WHO ARE LOST WITH THE LAST PARAGRAPH, EVERYTHING IN QUOTATION MARKS ARE TITLES TO A FEW OF KANYE WEST & JAY-Z SONGS. I WAS JUST TRYING TO BE CREATIVE.

HOPEFULLY THESE GUYS WORK THINGS OUT & CONTINUE TO MAKE GOOD MUSIC
Posted by B. James at 10:07 PM