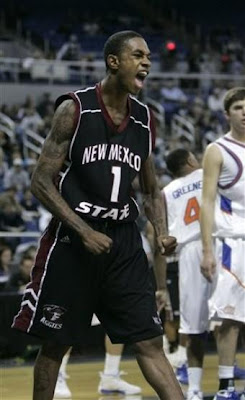 Growing up in East Baltimore Jahmar Young aka "JY" always had "Hoop Dreams" but like most young men growing up in the streets of Baltimore JY was sidetracked by the streets & what was going on in his environment. He had his share of getting in trouble & his share of run in's with the law. But JY was blessed to have had people in his corner who believed in him. He started playing AAU Basketball at a young age when his skills started to develop. He continued to play AAU Ball until he went to high school, he attended Northern High School where he really started to excel & make a name for himself; he spent three years there than he enrolled in Laurinburg Prep School. From there Jahmar earned himself a scholarship to New Mexico State. His journey is far from over, if it's the Lord's Will the next stop will be the NBA for JY. Until than Jahmar continues to work hard at improving his game & he uses his father's death & his daughter's birth as motivation.

2007-08 (Freshman): In his first season with the Aggies, Jahmar Young was a vital component in the NMSU offense. He was one of six players that averaged 10 points or more per game. Young averaged 10.3 points per contest in 21 appearances in the Crimson and White. He started in five games and shot 43.9 percent from the field and 81.6 percent from the free-throw line. Young also posted 26 steals and 22 assists as a freshman. In only his second WAC game, Young torched Boise State for a career-high 33 points in Boise, Idaho (Jan. 10) to give the Aggies a 3-0 start in league play. He was the first Aggie to score 33 points since Duane John accomplished the feat against New Mexico, Dec. 3, 2003. Young scored in double-figures in 11 games. At Louisville (Dec. 22), Young had 11 points, which began a four-game streak of double-digit scoring performances. In the next game, he provided 12 points against Alcorn State (Dec. 31). Young then posted 12 points in only 17 minutes before he was sidelined with an ankle injury in the WAC season opener at Idaho (Jan. 2). After missing the Fresno State game (Jan. 5) because of the injury, Young rebounded with the 33-point effort against the Broncos. In the first meeting of the year with Nevada (Jan. 24), he posted 19 points. His next double-digit scoring performance was against Boise State (Feb. 9) when Young supplied 18 points off the bench. To end the regular season, he scored in double-figures in three of the last four games; 18 at Nevada (Feb. 28), 11 versus San Jose State (March 6) and 12 against Hawai’i (March 8). Young continued the trend with 11 points against Idaho (March 13) in the Aggies quarterfinal game of the WAC Tournament. In conference games, Young ranked ninth in steals per game with 1.29.

High School: Young was rated as the No. 26 best prep recruit by hoopscooponline.com. As a youngster, he played for various AAU programs, including the DC Assault and Cecil Kirk. In 2004, Young averaged 18.3 points per game and shot 47.5 percent from the field in a four-game tournament for Cecil Kirk. Young, who shot 50 percent from 3-point range and 64.3 percent from the free-throw line, also averaged 2.8 assists and 2.5 rebounds during the tournament. Against Nike Team Florida in 2004 (July 21), Young went 11-for-23 from the field and 5-for-7 from 3-point land to lead his team with 34 points.

Personal: Young was born in Baltimore, Md., and he is the son of Clinton and Beverly Young. He is majoring in theatre arts.


Down the Melo Center: