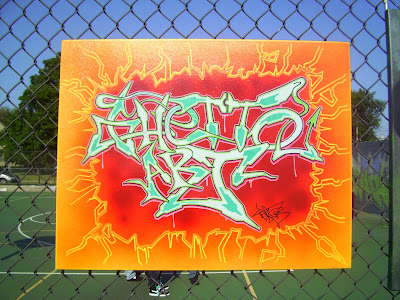 First & foremost I would like to give a Shout Out to all the Artist who participated in the Steady Baltimore Urban Eyes; Fuel for the Arts Fest. The art work you guys did that day was Phenomenal, I would like to say I respect what you guys do & I hope y'all continue to grow in y'all craft. IT WAS AWESOME!!!! Special Shout Out to my man Adrian thanks for the invite Homie...

Here's a Slide Show from the Art Fest:

Suppose that Leonardo, Monet, Picasso, or any of the recognized artisans of Western European culture were alive in the present day. Then, suppose that one of these famous artists decided to paint a masterpiece on the side of your house or on your front door or on a wall in your neighborhood. Would Picasso or Monet's markings be graffiti or art or vandalism or graffiti art? The answer may vary across people, but I would claim that those markings are art in the form of graffiti. Their markings would qualify as vandalism only if they appeared on private or public property without permission. The same answer holds for the present day, genre of graffiti known as graffiti art.

Graffiti art originated in the late 1960's, and it has been developing ever since. However, it is not readily accepted as being art like those works that are found in a gallery or a museum. It is not strictly denied the status of genuine art because of a lack of form or other base aesthetic elements. Most of the opposition to graffiti art is due to its location and bold, unexpected, and unconventional presentation, but its presentation and often illegal location does not necessarily disqualify it as art. I elucidate how some forms of graffiti can be accepted as art. This type of graffiti is known as graffiti art, subway art, or spraycan art. The arguments of vandalism and unconventional presentation as negating the ability of some graffiti to be art is usurped by an explanation of those properties apparent in some forms of graffiti that do qualify it, aesthetically, as art. To show this, I provide a historical context of graffiti, and then I provide persuasive evidence that graffiti art is art.

The origins of graffiti go back to the beginnings of human, societal living. Graffiti has been found on uncovered, ancient, Egyptian monuments, and graffiti even was preserved on walls in Pompeii. Graffiti is the plural form of the Italian word grafficar. In plural, grafficar signifies drawings, markings, patterns, scribbles, or messages that are painted, written, or carved on a wall or surface. Grafficar also signifies "to scratch" in reference to different wall writings ranging from "cave paintings", bathroom scribbles, or any message that is scratched on walls. In reference to present day graffiti, the definition is qualified by adding that graffiti is also any unsolicited marking on a private or public property that is usually considered to be vandalism.

Modern graffiti art originated in New York City, and it was known first as "New York Style" graffiti. This art form began in the late 1960's when teens used permanent markers to tag or write their names, followed by the number of the street on which they lived, in subway cars. This trend originated with the appearance of "Taki 183" which was the tag of a Greek American boy named Demitrius. Tagging soon became a way to get one's name known throughout the city. However, it should be noted that tagging appeared in Philadelphia before New York. The monikers, "Cornbread" and "Top Cat" were well known in Philadelphia, and when Top Cat's style appeared in New York, it was dubbed as "Broadway Style" for its long skinny lettering.

The advent of the spray paint allowed for the tag to develop in size and color. For it was not enough just to have one's name scrawled over any available and visible surface because everyone was doing this. The spraycan separated the taggers from the artists in that color, form, and style could be emphasized creatively with this new tool to produce s tag as a part of an overall artistic production. The tag which is monochromatic and a writing style that just about anyone can do, gave way to the throw-up, which is a two color tag usually in outline or bubble-like lettering. Again this style is not too difficult, but soon more complicated styles evolved. The stamp is a little harder and involves the use straight letters to produce a 3-D effect. The piece, which is short for masterpiece, appeared next, and it is a large multicolor work. A production is a piece that is usually on the scale of a mural, and it involves original or familiar cartoon characters in addition to the writer or graffiti artist's name. It should be noted that every graffiti form listed involves the artist's name, whether as the central feature or as an ornament within the piece because writers want to be known. Hence, finding new and creative ways to display one's tag in a highly visible place, as opposed to just scribbling it everywhere, was the fundamental force spurring the development of modern graffiti art.

Therefore, graffiti in the form of spraycan art is art. It has form, color, and other base properties as well as an arrangement of these elements into structures that qualify it aesthetically as being art. Just doing something with spray paint might make it graffiti, but it does not necessarily qualify it as art or graffiti art. In addition, when the spraycan art is analyzed according to the artist's intention and value to audience, there is even more evidence to suggest that it is genuine art. The only obstacle that has hindered the general acceptance of graffiti art is its location and presentation. However, the instances of acceptance of graffiti art by the art world shows that conventional methods of presentation are not all that matters in determining if something is art. And graffiti art is not to be disqualified as art simply because it might appear unsolicited. In short, graffiti in the form of spray can art is art like any other work that might be found in a gallery or a museum.
Posted by B. James at 12:37 AM