Faisal Shahzad, a Pakistani-born and naturalized U.S. citizen who was living in Connecticut, was arrested late Monday, some 53 hours after the bombing attempt, investigators said.

"We anticipate charging him with an act of terrorism transcending national borders, attempted use of a weapon of mass destruction, using a destructive device during the commission of another crime, as well as assorted explosives charges," Attorney General Eric Holder told reporters in Washington this afternoon.

"Based on what we know so far, it is clear that this was a terrorist plot aimed at murdering Americans in one of the busiest places in our country," Holder said. "We believe that this suspected terrorist fashioned a bomb from rudimentary ingredients, placed it in a rusty SUV and drove it into Times Square with the intent to kill as many innocent tourists and theatergoers as possible."

Shahzad was expected to appear in federal court in Manhattan today, where he'll be charged, authorities said earlier. 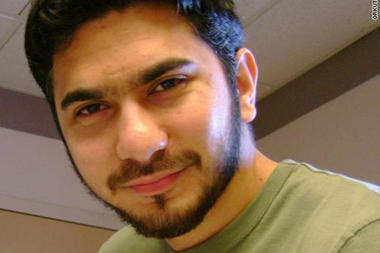 Faisal Shahzad, here in an undated photo from the social networking site Orkut.com, was arrested late Monday in connection with Saturday's failed bombing in Times Square in New York. Shahzad, 30, is a naturalized U.S. citizen from Pakistan. He was due in court Today.