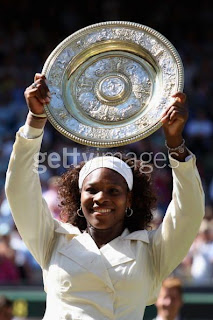 Ahhhhh The Sweet Taste of Victory....

Serena Williams was a woman on a mission on Saturday, defeating older sister Venus for her first Wimbledon title in six years.

Serena lost just eight points on her serve en route to a 7-6 (3), 6-2 victory. All three of her career wins at Wimbledon have come at the expense of her sister.

She converted her fourth match point of the final game when Venus smacked a backhand into the net.

"It feels so amazing," Serena said. "I feel so blessed … I feel like I shouldn't be holding the trophy."

The American captured her 11th Grand Slam title as a result, leaving her one shy of Billie Jean King for sixth on the all-time women's list.

Venus was going for her third consecutive Wimbledon Championship, coming into the match with a 20-match winning streak. All but three of those matches were done in straight sets.

"Today she was too good, she had an answer for everything," Venus said.

The Williams's hit a variety of strong shots in the final, committing a relatively low 30 errors in total. But the Centre Court crowd was oddly quiet despite the display, only rarely erupting with passion.

The first break point came in the eighth game of the first set. Venus hit a forehand long, allowing Serena to fire consecutive aces to keep things even at 4.

Serena had her best chance to break in the 10th game, winning one of the first set's few lengthy rallies to force deuce, but could get no further.

Serena jumped out to a 4-2 lead in the tiebreak, hammering a forehand down the line on the sixth point. She moved her older sister around the court with powerful groundstrokes to take a 6-2 advantage, and finished off the set two points later with a lob.

It marked the first time Venus lost a set at the tournament since 2007 and she never regained momentum in the match.

Serena won her service games early in the second with relative ease, while forcing Venus to scratch and claw on her serve. Venus double-faulted for the first service break of the match, giving Serena a 4-2 lead.

The eventual winner took the next game at love and then finally finished out the match after squandering three chances.

Serena now holds an 11-10 advantage in career matches between the pair.

The sisters have often remarked on how difficult it is emotionally to play each other. They will join forces later in the day to go for their fourth Wimbledon and ninth Grand Slam doubles championship, against Australians Sam Stosur and Rennae Stubbs.

The Only Thing I Think would be Better than this is to see Peyton Manning & Eli Manning face off in the Super Bowl.